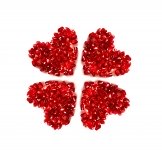 The pomegranate love story began thousands of years ago, possibly as early as 3500BC. It is thought to be one of the very first fruits ever cultivated and grown on the earth and from there, it has been seen in early drawings and artwork, referred to in writings, and even carved in stone on buildings and temples.

Legends and stories of the pomegranate fruit and its powers have been told and passed down for generations. The pomegranate is the symbol of fertility in some countries and an aphrodisiac in others. What exactly does this fruit represent?

The Pomegranate Love Story or Legend

Greek mythology tells the legend of Persephone, a goddess kidnapped by evil King Haides and taken to the underworld so he could make her his wife. Persephone's mother pleaded with Zeus to force Haides to release her daughter and he was successful.

There was a catch however – Persephone had eaten pomegranate seeds during her imprisonment, and that very act forced her to return to underworld once a year for several months. Legend says that Persephone eating the pom fruit caused the changing of the seasons – when she goes to the underworld it means death or winter, and when she returns home it means spring or new life has arrived.

Pomegranate Was Used by Shakespeare

The Hebrew Bible mentions the pomegranate fruit many times. Pomegranate images were carved into King Solomon's temple and the very shape of his royal crown was allegedly shaped like the crown of a pomegranate fruit.

The Judaic traditions use this fruit to indicate honor, excellent judgment or discernment, beauty, righteousness, and multiplying of children.

The Song of Solomon

The book of the Bible, Song of Solomon, is one of the most beautiful depictions of passionate love between a man and wife and in that book, pomegranates are mentioned!

Interesting Facts About The Fruit of Life

The pomegranate love story has many more facets, but you can see here just a glimpse of how this amazing fruit has impacted history over thousands of years.