The Importance of Pomegranate in Judaism

Why is the pomegranate in Judaism so important? There are repeated mentions of this fruit in the Bible and in historic writings that recorded the history of Judaism over the years. Let's take a look at some of the history of this amazing fruit. 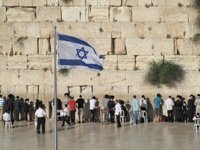 Pomegranates in the Bible

The second reference to pomegranates in the Book of Exodus is in Chapter 39, verses 25 and 26. Those verses say," And they made bells of pure gold and attached them around the hem between the pomegranates. The bells and pomegranates alternated around the hem of the robe to be worn for ministering, as the Lord commanded Moses."

References to pomegranate fruit in the Bible can also be found in 1 Kings 7:13-22, 2 Chronicles 4:13, Numbers 13:23, Song of Solomon 4:3, and Deuteronomy 8:8. Some historians even believe that the fruit Eve gave to Adam in the Garden of Eden could have been a pomegranate, although nothing proves this to be true.

The Torah mentions pomegranates too when it refers to the Seven Species.

Jewish traditions and writings refer to this fruit as a symbol of righteousness. Why? They say that because a pom fruit can have 613 seeds, that those seeds are representative of the commandments in the Torah, which also number 613.

The fruit is also rumored to represent constant learning, knowledge, wisdom, and being fruitful.

Rosh Hashana customs include eating this fruit during the holiday represents fruitfulness.

It's interesting to note that this fruit was used to decorate holy places for Jewish feasts and the image of it was sewn into expensive and elaborate clothing for kings during Biblical times. It's obvious that pomegranate in Judaism is very symbolic and important to the history of Judaism as a whole.