The presence of pomegranate in Greek mythology is evident when you read about the history of the pomegranate and when you observe their traditions even today that are based on that history or legend that supposedly took place so many years ago. 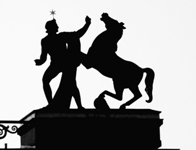 The story of Persephone and Hades is well known in Greek mythology. Legend has it that this young and innocent daughter of a goddess was taken against her will by Hades to be his queen in his underworld of the dead. She refused to eat or drink because she was so sad, but finally she ate six pomegranate seeds. Once her mother discovered where she was, she struck a deal with Hades. Hades said that he would allow Persephone to go back to the world if she hadn't eaten any food of the world of the dead. Since she ate only those six seeds, it was agreed that she would be permitted to spend 6 months in the world and 6 months in the underworld. Some people believe that the season of spring is when Persephone came up to the world and the fall season is when she returned to the underworld.

How is the pomegranate fruit incorporated in the traditions and customs of the Greek people today? There are many times the pom fruit is seen in their celebrations and religious gatherings.

The pomegranate tradition has been carried through many years of history in the Greeks and it still has a place of honor today in both life and death of the Greek people.