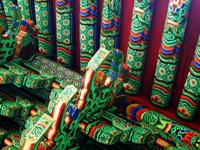 Now, the fruit is revered in Buddhism as one of the blessed fruits, of which there are three. People who follow Buddha believe that the peach, citrus fruit, and the pom fruit are blessed or holy. Why is this the case?

The story that has been handed down for many years is that Buddha was touched by a gift of a pomegranate fruit by an old poor woman to him as a way of paying homage to him. From then on, the fruit was considered valuable and blessed, so the people who worship this religion see the fruit the same way Buddha did.

Pomegranate Buddhism and The Demon Hariti

There was supposedly a demon or demoness at one time named Hariti. This demon was said to have feasted on the flesh of children. In an effort to give Hariti something other than children to eat, it's said that Buddha gave her pomegranate fruits to eat instead. Some legends say it cured her of her evil desires and behavior, others say it might have cured her, but it's not certain.

People who worship Buddha in China often give a gift of a picture or artist's rendition of an open pomegranate or multiple open pomegranates to couples on their wedding day. Tradition says that if a couple is given this wonderful and blessed gift, they will enjoy prosperity, many children, and great wealth and abundance.

The symbolism of this amazing fruit in Buddhism is similar to that of other world religions such as Islam and Juadism in that it represents wealth, health, prosperity, and fertility. These are the overriding symbols of the pomegranate fruit throughout mythology and the religions of the world over the last several thousand years.

So, when you pick up a pomegranate fruit in the market this fall, you'll be holding a piece of history or mythology in your hand. You'll be holding the same type of fruit that was spoken of in God's Word, the Holy Bible, the Islamic Quran, and in Catholic drawings and paintings. Interesting thought, isn't it?

When you eat the pom fruit, you'll be giving your body powerful antioxidants, nutrients, and vitamins, so some people might say you're blessing your body with what it needs to fight potential health problems. This ruby red fruit is said to be a powerhouse when it comes to fighting high blood pressure, cancer, and preventing strokes, so perhaps the people of long ago knew more about this fruit than we think!