The History of the Pomegranate Dates Back to Ancient Times 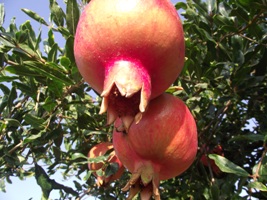 The history of the pomegranate is rather fascinating. One of the first mentions of a pomegranate tree was in a Greek myth about Side, the wife of Orion. The myth said that the very first pomegranate fruit tree grew from Side’s blood being spilled onto the ground beneath the cliff she jumped from…ending her life. She thought at the time she jumped that she was responsible for killing her own children (which was actually a lie). Since this time, the pomegranate has symbolized death and the miracle of rebirth.

Where Did It Really Originate?

Many written accounts refer to Persia (now known as Iran) as the first country to cultivate and grow the pomegranate plants. If you were to visit Iran, you’d see these fruit trees and bushes scattered in various places over the landscape. You’d be able to tell where ancient settlements used to be because of the thousands of pomegranate trees still thriving and growing in and around these areas. Did you know that scientists have been able to date some pomegranate plants and seeds back to 1000 B.C.? Incredible!

Countries in the Middle East cultivated pomegranate fruit trees several decades later. The countries of Georgia and Armenia grew the trees for years before the seeds and plants made their way to Spain and other Mediterranean countries. One of the varieties of pomegranate tree is named after the city of Granada in Spain! The pomegranate then made its way to China and eventually North America.

More History of the Pomegranate Tidbits

A few other interesting historical facts about this amazing fruit:

The Jewish rituals of years ago included reverence and worship of pomegranate fruit because of the fruit supposedly containing 365 seeds (matching the days in a year). Robes of the Jewish priests were colored using the dyes created from pomegranates. Bronze pomegranates are mentioned in the Bible as decoration for King Solomon’s temple.

Jeremiah 52: 22-23 says, “The bronze capital on top of the one pillar was five cubits high and was decorated with a network and pomegranates of bronze all around. The other pillar, with its pomegranates, was similar. There were ninety-six pomegranates on the sides; the total number of pomegranates above the surrounding network was a hundred.” Even then pomegranates must have been plentiful!

It’s important to note that most likely much of the history of the pomegranate has been lost over the last several thousand years. However, the bits and pieces we do know about this amazing tree and the fruit it produces is quite a rich and interesting history.