When Is Pomegranate Fruit Season and How Long Does It Last? 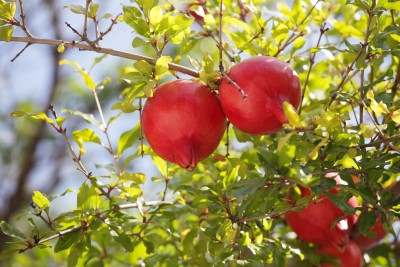 Where Do Pomegranates Grow?

California is well known for its cultivation and harvest of pomegranate fruit. If you live in the United States, it’s likely that the fruit you see in the market during the height of pomegranate fruit season has come from the orchards in California. The fruit in these orchards is grown primarily for juice production, but the fruits are also used for decorative purposes.

Pomegranate trees are typically planted in medium to heavy soil, but can survive well in sandy soil as well. The key is to have irrigation and ample drainage in the soil.

Trees are pruned during the winter to achieve the proper shape for growing the most fruit possible on every tree. During winter pruning, the height of the tree is pruned to the desired height (3.0 – 3.5m) and any old, bent, or broken branches are completely removed. During the summer, some pruning is necessary to keep the tree “open like a vase” so the fruit can grow uninhibited.

Commercial pomegranate orchards are irrigated either via drip irrigation or by using micro sprinklers. The irrigation system used not only provides water for the trees, but also is the vehicle by which fertilizers are fed to the trees. The amount of irrigation varies through the pomegranate fruit season with the amount starting out rather low, but then increasing during the hotter summer days prior to harvest time. Following the harvest, very little, if any irrigation is done.

During the season, the pomegranate trees and fruit must be protected from insects. The most effective methods used to be with harmful chemicals, but the growers found that those would also damage a percentage of the fruit, so they switched to organic compounds. Now, most commercial growers use an organic mix of phosphor compounds to keep the insects at bay.

Growers desire to have large pomegranate fruits instead of small ones, so in order to achieve the desired size of fruit, they must thin the trees at least once during the pomegranate season (prior to harvest). The size most growers like to see is a pomegranate fruit the size of a softball. Once a group of fruit develops, any fruits that are touching are thinned, allowing the remaining fruit to grow bigger.

Pomegranate fruit is popular for decorating purposes, especially during the holidays, so growers are aware that the outside appearance of the fruit is very important to consumers. Growers know the fruit is ready for harvesting when the fruit makes a “metallic” sound when tapped. The general rule is that pomegranates are ready to be harvested 6 to 7 months after the plant has flowered.

The fruits are carefully picked, stalk removed, and then placed manually on a weighing machine. The pomegranates are organized in shipping boxes according to similar size and shipped to markets in the local area or across the country. The fruit doesn’t ripen further once it has been harvested, so it travels and stores well. This is one of the reasons this fruit can be shipped easily across the country. Pomegranates can be stored in cold temperatures for several months if they are harvested prior to the height of season.

Read enough about fruit season and want to discover more about the healthy fruit?